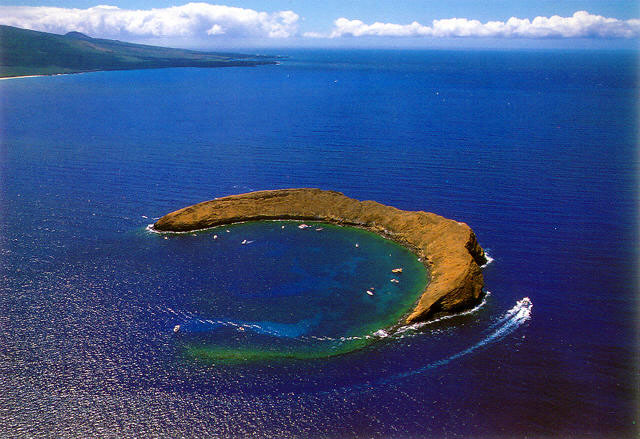 Offshore marine preserve just three miles off the coast of Maui sits a crescent-shap’ed islet, a marine preserve that abounds with tropical fish and calm waters.  Molokini was declared a State Marine Life Conservation District in 1977 and is considered one of Maui’s top snorkel sites.

Legend has it that Molokini is the result of a jealous rage.  The volcano goddess, Pele, had a dream lover, Lohiau, who lived in Maalaea.  Lohiau married a mo’o (lizard) and in anger, Pele bisected the lizard and the tail became Puuolai Hill in Makena and the head turned into the Molokini islet.

An uninhabited land mass, Molokini rises 156 feet above sea level.  Its northern rim has eroded away to form a protected cove perfect for diving and snorkeling.  Numerous water activity boats make Molokini a daily destination, touting its crystal clear waters and variety of marine life.  It’s home to more than 250 species of fish, some of which are endemic to Hawaii.  There are even instances of manta rays entering the bay.

Explore the islet’s pristine waters on a snorkel or scuba charter.  “It’s one of the best dives I’ve ever been on,” said a smiling Charles Mckee after returning from his Molokini dive charter.  “The visibility was great, the water was warm, we saw all kinds of fish and an eel, a turtle, and we had our dive instructor take underwater photos of us.” 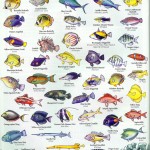 -Fish feeding is banned at Molokini as it throws off the natural balance between prey and predator.

*Corals look like rocks but are actually colonies of tiny animals that build their coral home over a long period of time.  Accidentally brushing against coral, hitting or stepping on it can cause harm. *Removing marine life from their homes can have a cumulative effect considering the fact that many people visit Molokini on a daily basis.