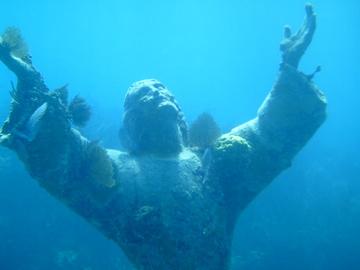 Located at the northernmost site of the Key Largo Marine Sanctuary, most reef species are represented here. Site is relatively shallow, visibility usually good as it’s location protects it from the strong currents lying beyond but it is influenced by tidal currents passing through Hawk Channel.

Because of its distance from the more central dive sites, comparatively few divers visit this reef although it is of exceptional interest and beauty offering a variety of dive options from shallow to deep dives. The shallow upper section of the reef abounds with marine life and is perfect for snorkelers.

A natural extension of Carysfort Reef, similar in its configuration and displays a double reef structure. It’s famous elkhorn coral gardens make this reef a highly attractive location. South of the reef lies the remains of the H.M.S. Winchester, a 933 ton British man-of-war that sank in 1695 after running aground on the reef.

Named for the angular shape of the reef, it is a classic example of spurs and grooves meandering down the slope of the reef. The coral fingers are extremely well-defined and are separated by level passages of clean sand; some of the spurs are high enough to be considered miniwalls. Corals and fish abound here but wrecks hold the secret to the appeal of this site. The Civil War Wreck, a 752 ton steamer sunk in 1866 has lovely fingers of elkhorn coral situated at depths of 6-18 feet. The remains of two more wrecks, probably a tug and a barge are also scattered in this area.

By far the most famous dive in the Key Largo Marine Sanctuary. The Statue of Christ of the Abyss (also known as Christ of the Deep), rests on a concrete base located within a short canyon. This area is also celebrated for its marvelous specimens of brain coral and the eastern side of the reef displays classic coral fingers which are rich in marine life. Smoky, the celebrated barracuda, is a regular here. This area also includes Grecian Rocks an extremely popular reef among snorkelers.

Grecian Rocks is an exceptionally popular reef for snorkelers. The grass and sand on the back side provide good anchorage, and the shallow reef buffers the waves so the waters are very calm even on windy days. It is very easy for snorkelers to swim from the boat up to the reefline where the corals and brightly colored fish abound.

THE CHRIST OF THE DEEP STATUE

The Christ Statue was cast in Italy and donated to the Underwater Society of America by Egidi Cressi, an Italian industrialist and diving equipment manufacturer. It is a 9 foot tall bronze duplicate of the Christ of the Abysses statue, which stands in 50 feet of water off Genoa, Italy. Set in a beautiful reef area known for its outstanding brain corals, the figure of Christ stands silhouetted against the blue waters of the ocean, His arms upraised to the surface. This dramatic and memorable picture is one that most diving visitors to the Keys shouldn’t miss.

An English built cargo vessel lost in a tragic chain of events in 1942. The Benwood rests on a level expanse of sand noticeably lacking in coral growth, so apart from the wreck itself there is comparatively little to see. Its fractured stern lies directly beneath the marker at a depth of 2 feet, while its bow points offshore at a depth of 45 feet. The bow section looms up out of the sand, in contrast with the rest of the ship which is almost wholly submerged.

An exceptionally beautiful site, the ever popular reef is crammed full of caves, canyons, ledges, tunnels and

A relatively deep site, slopes gently from a depth of 30 ft. down to the sandy seafloor, depth 70 ft. To find the Blue Hole itself, look for two sand chutes running from the slope of the reef to its base; south of the chutes a type of mound thrusts its way upwards out of a deep canyon. The seafloor is of clean sand, without the well-developed staghorn and elkhorn colonies observed elsewhere.

Reigns as the world’s most popular dive site. The reef comprises a classic spur and groove system which begins near the surface and falls of gradually to a depth of 55 ft. It is washed by the Gulf Stream, so visibility is usually excellent. Impressive concentrations of marine flora and fauna cover just about the entire tropical reef spectrum.

Twin 327′ coast guard cutters were painstakingly sunk in 1987 as part of an artificial reef program sponsored by the Keys Association of Dive Operators. The Duane, more frequently dived because of her depth, lies upright with a slight list to starboard at a depth of about 100 ft. The Bibb overturned while sinking and lies on her starboard side; you will begin to reach the ship’s exterior at a depth of 95 ft. Both ships are a equally rewarding dive with a fascinating history. With extremely powerful currents you may occasionally have to postpone your dive.

Custom fields can be used to add extra metadata to a post that you can use in your theme.

Allow comments.
Allow trackbacks and pingbacks on this page.

Thank you for creating with WordPress. | Documentation | Feedback